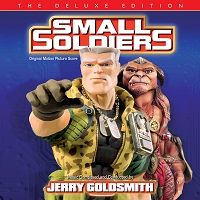 I really like Joe Dante – everybody loves Joe Dante. I’ve always thought his best two films were Gremlins 2 and Matinée, made consecutively – but neither was a specific success and he found himself employed in television for some time afterwards. His go back to bigger things came in 1998 with Small Soldiers, among the first releases from the fledgling Dreamworks studio. Some sort of cross between Gremlins and Toy Story, the film sees two sets of toys (the soldiers and the Gorgonites) fighting one another contrary to the usual Dante backdrop of suburbia. I recall it being fairly entertaining, if lacking the more subversive humour of Dante’s better films, but I haven’t seen it since its release.

Dante was perhaps one of the most frequent directorial collaborators with Jerry Goldsmith during the last handful of decades of the legendary composer’s career. His scores for the director generally combine real warmth with zany comedic touches and a lot of catchy tunes – and Small Soldiers is not any exception. It’s initial album release at that time was very entertaining, however in normal with most US-recorded soundtracks of your day was rather brief and omitted some fine material; this new limited edition includes the complete 68-minute score plus various bonus tracks. 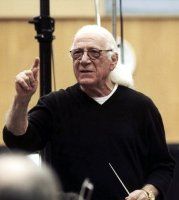 There are many fine themes running right through the score. The Commando Elite (the toy soldiers) obtain the best one, a rousing march which Goldsmith described at that time as “the brand new Patton march” (the true one actually appears in the film under a parody of the famous George C. Scott speech). It’s the next Joe Dante movie that Goldsmith wrote a nod to their own famous theme – a far more overt, direct parody of it seems in The ‘Burbs. It seems completely in the brilliant “Assembly Line”, which opened the sooner album but is the third track with this one – the brief opening track here, “Globotech”, plays on the studio logos and is really a military snare piece but there’s just the briefest burst of the familiar theme by the end.

An action motif opens the previously-unreleased “He’s Here / Chip Hazard / Just Toys”, a bright and colourful figure; the center part features among the score’s signature devices, a power guitar riff (nearly the same as one in Chain Reaction) used to represent the tough-guy lead of the soldier toys. The brilliant “Assembly Line” itself comes next – prepare yourself, after two decades of hearing it, for a surprise following the main thematic part ends, since it doesn’t segue into what it used to – instead it switches into a pleasant little “suburban bliss” piece that’s actually the signature sound of the Goldsmith/Dante scores. What used to get rid of “Assembly Line” now appears instead in “Alan’s Town” – another lovely, choppy little little bit of magic (Alan’s theme) that leads around some trademark Goldsmith horns by the end.

The synth effect in the beginning of “The Boxes / Off the Truck” is quite much like one in Star Trek: Insurrection (released exactly the same year); the piece cycles by way of a few melodic segments, including some nice bursts of the soldiers’ theme. The initial 1 / 2 of “Gorgonite Scum / Almost Gold” is fairly an aggressive little bit of suspense, which ironically leads in to the first appearance of the gorgeous love theme, that is almost impossibly warm and lovely.

“Roll Call” – from the initial album – opens with a reprise of Alan’s theme and sees the composer going right through some fairly light, playful material which eventually results in a wonderful trumpet solo, suggesting an excellent longing. The guitar returns with some strident brass music to lead us into among the score’s main themes, that is the familiar “When Johnny Comes Marching Home”, peppered wittily through the entire score. “Alan and Archer” opens with that “longing” theme from the prior cue given a much fuller arrangement, also it’s really beautiful; we go back to a far more playful style midway through the piece and lastly hear the fairly comic little theme for the Gorgonites which includes always reminded me a little (superficially) of Franz Waxman.

A reasonably desolate sound is heard in the previously-unreleased opening to “Destruction / Branded” before we arrived at the group of variations on the love theme which dominates the latter piece (familiar from the initial album). “Plan Assault” is really a brilliant little bit of action music – an extremely bold militaristic motif drawn from the soldiers’ theme undergoes a couple of variations before we reach the primary action idea, a brilliantly bold trumpet line playing on the counterpoint from “Assembly Line” and the familiar 90s Goldsmith stereo-bouncing drum pads. The action continues into “Special Design”, having an unusual percussion device (familiar to fans of the composer from Wild Rovers of most things) running through a lot of the opening 1 / 2 of the cue, which in turn explodes into life with a battery of drums (both real and synthetic) and the soldiers’ theme on horns and trombones, accompanied here by way of a piercing synth percussion effect.

A lot of the music in those opening eleven cues was included on the prior album; but out of this point forward, a large proportion is previously-unreleased. “Speak to Me / Not Found” includes a busy little theme occurring down the road, too (nearly sure what it represents), a horn version of “When Johnny…” and also the final Post. “Team Gorgonite” reprises that busy theme, that leads right into a somewhat muted version of the Gorgonites’ theme. Three very short cues are joined together in “Phone Wires / Gorgon / The surface of the Stairs” (the highlight being truly a warm secondary theme for the aliens, representing their seek out their home, in the centre); then comes the suspenseful “Stand Down / Negative Target”. Something a little different in “THE BRAND NEW Army / Brain Chip”: jazz! Don’t worry, it segues incongruously right into a version of the soldiers’ theme with synth choir accompaniment, in the same way worthwhile Joe Dante score should.

Next through to the album we’ve some vintage monster movie music, with a fresh recording of some Franz Waxman’s The Bride of Frankenstein (called “Bombshelley”). I’d probably have gone it for the bonus track section, nonetheless it’s nice to possess it released. The Gorgonites’ search theme may be the highlight of the lovely “The Wind”, and we’re right into a brilliant quartet of action tracks. The trademark Goldsmith low-end piano has gone out completely force in the darkly comic “The Gwendys / Terms of Surrender”, then your militaristic “The Trojan Box / Rocket Entry” ratchets up the strain, leading into “Gwendys Attack”, including a subtle little in-joke musical mention of First Blood before exploding into ferocious, full-bodied action by the end. Finally, “That is Fun” a lot more than lives around its name, initially continuing the action from the prior cue before launching right into a sweep through various thematic material (it’s one of the better of the newly-released cues).

An additional trio of very short cues is combined in “Toast / Down the River / Lost Battle” (which include the final Post, again, “When Johnny…” again in addition to a nice synth choir-dominated little bit of suspense, that is new). “I’m Scared” is familiar from the initial album: a variety of action/suspense with the Gorgonites’ searching theme and a boisterous version of the soldiers’ theme. “Negotiations” undergoes some interesting suspense material prior to the terrific “Fire in the Hole”, with some fast-paced action including an extremely welcome reprise of the fight motif from “Plan Assault” and an extremely unexpected new one (with a Slavic feel).

We start the ultimate part of the score in the great “BELIEVE ME”, which opens with the wonderfully catchy opening riff from “Assembly Line” – this builds and accumulates to a frenetic action variant on the soldiers’ theme, the fight motif and lastly the Gorgonites’ theme. There’s one final newly-released treat, “No Prisoners” (undoubtedly the longest of the brand new tracks) – a fresh action motif inside it, too (“Ride of the Valkyries” playing in counterpoint to the soldiers’ theme!) It’s very entertaining, with plenty of ferocious action and witty little touches (I really like what sort of Gorgonites’ theme can be used – full-on “Ride to Dubno” style). Following the dramatic “Chip Dies / CLEARING UP” we arrived at the gorgeous, rousing finale “Off to Gorgon”, with sweeping versions of the searching theme and the love theme leading one in to the other, vintage Hollywood style.

Following the score, several alternative versions of cues are heard and lastly a couple of bits of source music, including Goldsmith’s hilarious disco version of “Also Sprach Zarathustra” – can’t think that after two decades, we’ve got that on an album. Small Soldiers is really a really fun, entertaining score also it might surprise you merely how deep its thematic base is. As the old album was great, it did miss off some important material, also it’s great to possess that available now. Much like all Goldsmith scores of the era, Bruce Botnick’s recording is spectacular and contains never sounded much better than it does now. You understand you need to obtain it!