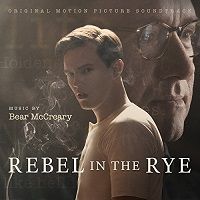 Rebel in the Rye soundtrack review

A biographical film concerning the life of J.D. Salinger directed by Danny Strong, Rebel in the Rye is defined through the World War II years and leads around the publication of guess what happens. Starring Nicholas Hoult as Salinger and featuring Kevin Spacey as his mentor, the film has only received an extremely limited release up to now. Talented composer Bear McCreary has described the score to be perhaps his most personal yet so when you hear “Innocence” – the primary theme, which opens the album – it’s super easy to listen to why. Clearly owing a debt to To Kill a Mockingbird (the masterpiece of McCreary’s own mentor), it’s a striking piece for piano, flute, strings, subtle brass and accordion, going off in its direction melodically. The composer has demonstrated his gifts in various areas up to now in his career which is really a side to him that people haven’t heard an excessive amount of before – let’s hope we hear plenty more of it in future.

The secondary theme is introduced within the next cue, “Early Writing” – that one includes a real buzz to it, a captivating energy that’s done very cleverly. However the composer adapts it in a variety of ways signalling different emotional states – probably the most impressive being perhaps “Inspiration at War”, with a tragic air to it. These classy orchestral sounds coexist through the album (but especially in the initial half) with various big band swing cues – they’re originals, but sound very authentic. It can give the album a fairly curious flow, the dual personality not functioning that brilliantly as a listening experience, as impressive as each facet is individually. One nice feature may be the way McCreary uses piano to represent the typewriter through the orchestral cues, sometimes augmenting them with the sound of actual typewriter keys. The score does become darker since it progresses, and the composer introduces a lot more modern, electronic sounds to accompany the orchestra – the Indian tint for some of it really is quite interesting, though inevitably this isn’t as satisfying because the raw emotional power of this main theme. Still – the highlights listed below are really excellent, show a fresh side to Bear McCreary, and the album’s an easy task to recommend.